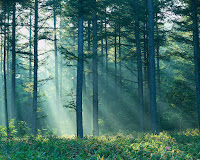 We are also limited to concepts of the past, which we can not change, the present, which is ever changing and the future, which we can not foresee. I believe God is not constrained by these concepts. To God, the past, the present and the future are all visible in one panorama.  This gives God the ability to intervene at any time in any part of our lives. It also sets up another concept that I have trouble understanding. If God knows the choices I will make, then do I truly have free will to make choices? (Please allow me to postpone discussion of this topic to a later time.)

To bring order to His creation, God established thousands rules of nature. These are the cause and effects that rule all of God's works.  If I am cut, I bleed; water evaporates; sunshine causes some plants to grow and some to wilt; water flows downhill; etc. The wonder of it all is that the earth operates in a balance. God rarely chooses to suspend the laws of nature.  When they are suspended, we refer to it as a miracle.
If we disobey or ignore these laws, the results can be a tragedy. A small boy runs after a ball that rolls into the street.  He is hit by a speeding car and injured.  He is rushed to the hospital and we begin praying for his survival. Depending on the extent of the injuries, loss of blood, damage to vital organs, the skill of the surgical team and any number of other  factors, the boy may survive or may not.  But the results depend largely on the laws of nature.
Why does God allow these things to happen is the subject of a later post.  But sufficient it to say, the laws of nature are the rules God set in motion to govern this world and we ignore them at our peril.

There are other considerations about the nature of God.  What does it mean to be created in the image of God?  Does man have free will and why did God see fit to give it to humans?  Can man's free will alter Gods will and plans for the earth? What is God's relationship to mankind; is it evil, good or neutral? These are pretty heady subjects and will be subjects of later posts.